The impact of  Percy - the fourth cyclone in as many weeks - was felt deeply on the remote  Northern Group islands of Nassau and Pukapuka for several years.  The islands received an almost direct hit when the cyclone was at its strongest.  It was classified at the time as a category 4 to 5 cyclone on a scale where 5 is the most severe.  The Joint Typhoon warning centre  estimated sustained winds of  115 knots (212 kph, 132 mph).  And in the aftermath, there were fears the islands would have to be evacuated


CYCLONE RAE: The one that turned into a tropical storm

When cyclone number five - Cyclone Rae - formed, it looked like the Cook Islands was in for another battering.  This time though, it quickly lost strength, was downgraded to a tropical storm and then moved out into the Pacific.  It passed 172 miles south west of the capital island of Rarotonga, causing only intermittent gales and squalls.  But a couple in Arorangi had their house destroyed by a waterspout two hours after the cyclone warnings were cancelled!

The destruction caused to Pukapuka by Cyclone Percy.  These photographs were taken by the crew of a New Zealand Air Force 'Orion' which overflew the island a few days after the cyclone struck.

The remoteness of the islands meant that reports from them were few and far between.  Even the Cook Islands government nearly 1,000 miles south in Rarotonga had difficulty finding out what had happened.  TVNZ (Television New Zealand) was the only broadcaster to visit Pukapuka in the aftermath.  These pictures are taken from that report and published here exclusively with permission of TVNZ One News.

Only 10 per cent of houses on Pukapuka survived intact.  Traditional homes were washed away.   On Nassau, 90 per cent of the modern structures were damaged; all thatched buildings were destroyed.   A  concerted effort to rebuild  took more than four years, but the remoteness of the two islands made work a logistical nightmare.  And even now signs remain of the fateful day the cyclone struck.

Water supplies were a major problem after the cyclone.  Wells were contaminated and down spouts used for collecting rain were destroyed.   Fresh water was flown in and the Government of French Polynesia gave the islanders a desalination plant.

At one stage it was suggested women and children should be evacuated until rebuilding was complete...but Pukapukans are made of stern stuff, and were determined to stay and work their way through the hardships

Islanders met to discuss "what next?" 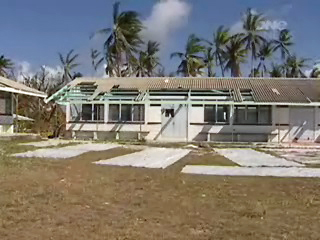