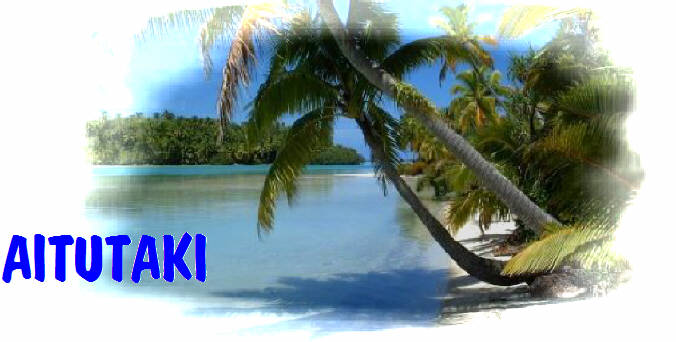 It's Saturday, 11th April, 1789 - 18 DAYS BEFORE THE MUTINY - and His Majesty's Ship Bounty has been at sea four days, after setting sail from Matavai Bay in Tahiti (left).  The weather is far from kind.   In his log, the captain writes of fresh gales, much rain, very severe squalls and lightning.    He has just made sail amid more heavy rain when he sees a small island "about 5 leagues off" and begins to head for it.  These are his first impressions as his vessel approaches.

"I had little reason to expect making any New Discovery, as my tract altho not traversed by any one before, yet was bordering so near on others, that I scarce thought it probable to meet with any land"

William Bligh will be forever associated with the infamous mutiny on his ship, The Bounty, but in Cook Islands' history he will always have a special place as the man who discovered Aitutaki.   It was more by luck than judgement though, as he records in his  log book...

"I could not get near the shore on account of the Wind, nevertheless, there appeared broken water between all the Keys, & I am inclined to think they are all joined by a Reef.  I saw no Smoke or any Sign of Inhabitants, it is scarcely to be imagined however, that So charming a little Spot is without them."

I am indebted to the State Libarary of New South Wales, Australia for providing me with the extract from Bligh's log book, and to their librarians for creating a transcript of the entry.  All spellings and capital letters are exactly as they appear in the log.  The Library are currently displaying on line the actual log book pages relating to the mutiny. I cannot recommend their resources too highly, nor thank them enough for their help.

"At two in the afternoon we were within three miles of the southernmost key and could see a number of people within the reefs.  Shortly after a canoe, in which were four men, paddled off to us and came alongside without showing any signs of apprehension or surprise.  I gave them a few beads and they came into the ship.  One man, who seemed to have an ascendancy over the others, looked about the ship with some appearance of curiosity, but none of them would venture to go below.  They asked for some boiled fresh pork which they saw in a bowl belonging to one of the seaman, and it was given them to eat with boiled plantains.  Being told that I was the Earee or chief of the ship the principal person came and joined noses with me, and presented to me a large mother of pearl shell, which hung with plaited hair round his neck; this he fastened round my neck with signs of great satisfaction."

Bligh's meeting with the islanders is recalled in the catchily titled "A voyage to the South Sea undertaken by the command of His Majesty for the purpose of conveying the Bread-Fruit tree of the West Indies in His Majesty's Ship the Bounty commanded by Lieutenant William Bligh", which was published in London in 1892

PUTTING AITUTAKI ON THE MAP

Above is Bligh's own remarkably accurate sketch of Aitutaki.  He was acknowledged as a great map maker.  Below is a detail from the drawing, recording the island's geographical position.   Note the spelling of the island's name as Wytootackee" and Bligh's own signature (written as 'Wm Bligh').  Double click either image for a larger version

"The people that came off to us did not differ in appearance from the natives of Hervey's Islands, seen in Captain Cook's last voyage, though much more friendly and inoffensive in their manners.  They were tattooed across the arms and legs, but not on the loins or posteriors, like the people of Otaheite [Tahiti].  From their knowledge of iron they have doubtless communication with Hervey's Islands, which are not more than eighteen leagues distant from them."

Bligh also records his impressions of the islanders themselves. And he's perceptive enough to note that they resemble people from Hervey's Islands which was the name given to the Cook Islands by Captain Cook

The sketches are part of the collection of the State Library of New South Wales. The whole of Bligh's book, including an account of the infamous mutiny, is available on line thanks to the amazing Project Gutenberg.
Download it from here

"...we discovered an island of a moderate height with a round conical Hill towards its northern extreme.....a number of small Keys were seen from the Masthead lying to the SE and at Noon could count nine of them - They were all covered with Trees, and the large Island, had a most fruitfull appearance.  The shore was bordered by flat land with innumerable CocoaNutts & other Trees, and the higher grounds were beautifullly interspersed with Lawns.