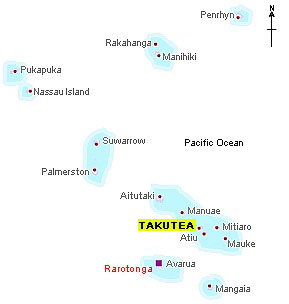 Twenty kilometres (12.4 miles) north west of Atiu is the tiny coral cay of Takutea.  It's only 6 metres (20 feet) above sea level at the highest point and most of it's covered in coconut palms.

Thousands of red tailed tropicbirds and red footed boobies (above left and right)  nest on the island, which is one of the most important sea bird breeding grounds in the Pacific region. Feathers from the tropicbird are gathered for traditional costumes.  Terns, noddies and frigatebirds are also found in large numbers.  The kota or great frigatebird (centre) that nests there has become an unofficial emblem for the Cook Islands.

No doubt the birds have thrived because Takutea is the only island in the Cooks never to have had a permanent population.  Even when some of Captain Cook's crew went ashore over 230 years ago, there was no evidence of a permanent settlement, although they found some empty huts.

Island leaders on Atiu have signed an agreement with a not-for-profit environmental organisation to develop a 297 acre wildlife sanctuary on Takutea.   A five mile restricted fishing zone will also be set up around the island.

The agreement means no changes will be allowed to the natural environment for 20 years.  The organisation - SeaCology - have previously funded environmental protection work on Mangaia.

The island is surrounded by a pristine, unbroken reef

You won't find the island on any surfers' guide, but 400 metre wide rides are possible according to islanders on neighbouring Atiu


Javascript DHTML Drop Down Menu Powered by dhtml-menu-builder.com
The island has been designated a wildlife sanctuary.  It's administered by a Trust and special permission is needed from the Trust Chairman, High Chief Rongomatane Ariki if you want to visit.

You can find out more about birdlife on Takutea and throughout the Cook Islands at the
Cook Islands Natural Heritage Trust Biodiversity Website.

EXPLORE ANOTHER UNINHABITED ISLAND  OR FIND OUT MORE ABOUT  ATIU

"I did not sail off the end-of-the-world after all! I found a magical little uninhabited island, where time stands still.  Well, I sort of did, anyway.

We went diving at Takutea Wildlife Sanctuary and about fell over backwards within one minute of getting into the water - we had stumbled onto a divers paradise"
Log of Captain G, skipper of the RV Bounty Bay

The Research Vessel, Bounty Bay is based in Rarotonga and its operators are the only people allowed to take tourists to Takutea.   They've been granted special permission by the High Chief of the Trust who manage the island.   One of the reasons for this is that they are also dedicated conservationists.   Captain G (Dr Graham Wragg, pictured above right) and his team have many years experience of running expeditions around the Pacific

The island is sometimes still called Enua-Iti which means Small Island.    Captain James Cook recorded that name in his journal when he reached the island on 4 April, 1777 and sent boats ashore to collect food.